American workers started to call the camp and he knew about 8 months ago that he was going to come to America.    He attended a Thai  school and finished 10 grades. But in the refugee camp there was no chance for additional education.  He wanted the opportunity to learn so he desired to come to the United States. He worked hard and can understand English to a great degree. 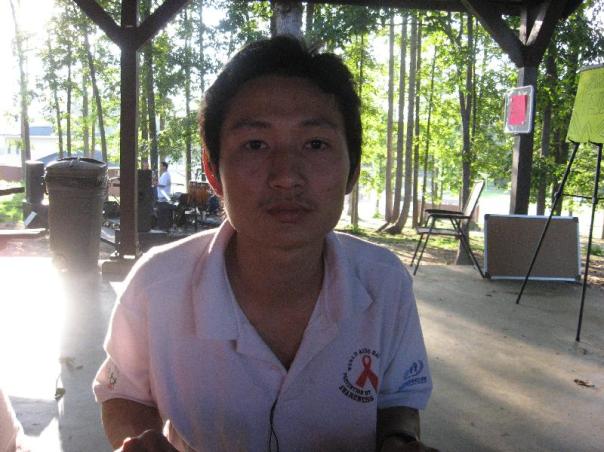 Savy Sher Mu Lar “Savy”, went to the Thai refugee camp in 2001 when he was 14.  He is 21 now.  He never knew his mother.  He had no relatives in the camp.     He has talked to his only brother who remains in Burma and found it is very dangerous for him so he is concerned.  His brother lives with distant relatives and there is no one on whom he can depend.  His brother is 13 years old.  Boys this age can be drafted by the junta.

He lived in a boarding house for eight years.  There were 50 people in the boarding house.   He is the only person who came from the refugee camp.

Savy [Say Vee] is married to Naw Paw Kyet Yaw who is still in the refugee camp.  She is the oldest of six, four brothers and one baby sister.  Her mother and father hope to bring the whole family to America.    A few months back the family was called by the United Nations to begin processing in preparation to come to America. Savy said they are Christian. Unfortunately during that time the father had slipped away from the camp to find work in Thailand.  He did not go through this first screening.   It seems that a group in Minnesota had begun preparing to have this family come to that area of the U.S.   Savy, using a calling card, talked with them and encouraged them to think of coming here to North Carolina.  He is hoping he did not mess up their chance to come to America.

Savy recently got a job in Greensboro.  He wants to get more education.  His desire is to work at a regular job so that his life will be good in the future.  He wants to contact his brother.  He is looking forward to his wife, Paw Yaw,  joining him in High Point, North Carolina along with her whole family.

Jesus is first and foremost in my life. He is above all religions, principalities and powers. In everything He must increase and I must decrease. Into the hands of Jesus, God has placed life and death, truth and purity. strength and meaning. Only in a growing understanding of the triune God, and his son Jesus can I do, breathe, exist and serve. I have a Bachelor's degree in Bible from Vennard College, a Master's in Social Science from Azusa Pacific University and a Ph. D. from Ohio State in Family Relations and Human Development. I am an ordained pastor involved in cross-cultural ministry. I am currently employed at several colleges as an instructor. If you need to get in touch with me, just leave a comment, I screen all comments and so you can leave further contact information which I will erase before it is published. -John
View all posts by johnmcmurphy »