Lwin about his planned preaching tour and so Zaw Thu Linn was invited to come through High Point.  Our Chin/Burmese congregation is enjoying 3 days of Bible teaching both mid-day and repeated in the evenings led by this minister from Myanmar.

Zaw Thu Linn is the founder of the Myanmar Youth Rehabilitation Ministry in Yangon.   This ministry is involved in drug rehabilitation and Bible Training.   Pastor Zaw Thu Linn shared his testimony of growing up as the son of a great Burmese pianist but he became a great addict of Myanmar.   In 1989, David Yuma (now deceased) took this young drug addict aside, taught him about Jesus.   Zaw Thu Linn converted from Buddhism to Christianity and one year later sensed God’s call to ministry.   Then in 1994 Zaw Thu Linn received a vision of the Drug Rehabilitation and Bible Training ministry which he subsequently founded.

This Burmese  father of 3 daughters (ages 17, 14 and 10) is married to a S’gaw Karen wife.  Together they live and minister in Yangon, Myanmar.

This week the Burmese fellowship of First Wesleyan had a real treat in that Rev. Hlah Myint of Yangoon Myanmar came for the weekend to teach and preach to the congregation.  Rev. Hlah Myint, nicknamed Pastor “Nehemiah” is traveling around the United States on a 6 month visa.  He is a leader of the Baptist church in Myanmar.  After he leaves High Point he will minister in Charlotte then will fly to Maryland.   Our guest was hosted by Zarni and Rose and the Saturday Bible teaching was in the home of Thang Tlang and Hlamay. 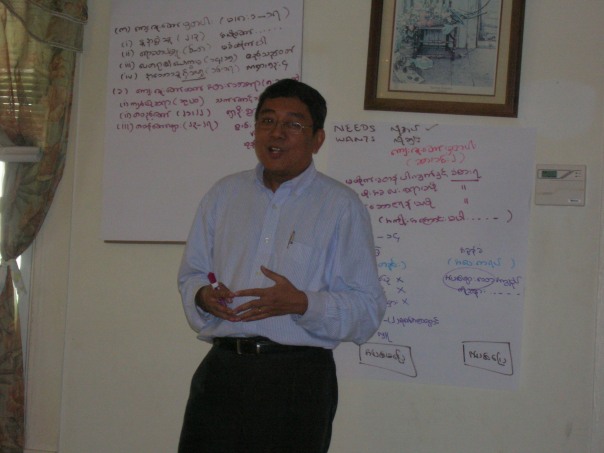 The first of two children’s camps was last week and the second is going on now.  Several of our Burmese children were enabled to attend these camps through the scholarships provided by the Outreach Class.  Thank you Jerry Farlow and class.

Frosintina made a quick trip to High Point last weekend so that Joshua would be back in time for camp.  Grandma Nu Nu got to see the baby for the first time.  Frosin Tina has some great pictures of the baby on her Facebook page.

Klo  Say with Nelson and Nyein with June will join the FWC father/son camping trip for the Aug 13th weekend.

A Burmese (province) preacher is going to be in the area next weekend.  He will speak on Saturday night at the Chin home cell group and Sunday morning in the Burmese language service at FWC.

One Kiss’ son. Ku Lu Taw, had a choclear implant (in one ear) and is learning to hear for the first time.

We have had 4-5 newly arriving refugee families in the last two weeks.

Lea Rey and Zu Zu are going to try to meet with Dace Hennesey about some work this week.  He helped Da Htoo get a job a few months ago.

Klo Say preached in the Karen language service this past Sunday.

Max Inthisane stepped in to preach to the Laos congregation while his father was away a few weeks ago.  But Max says it was not preaching but just a “teaching”.

Bibi Thakbal will start classes at GTCC on August 22.

Great to get back from vacation and get in touch with my friends once again!

I want to make a brief posting to mention Zoya Phan.  She is a Karen Burmese of an animist heritage who has received an advanced education in the United Kingdom.  She has become a capable western based spokesman for Myanmar nationals.  Her autobiography helps to capture the circumstances faced by those who must flee Burma.  I have gained much insight into the culture of the Burmese refugees I have encountered in High Point by reading her book.

Sunday, Zu Zu took some pictures of the new Karen worship service for me.  July Paw has been serving as the keyboardist, a variety of people have sung, prayed, testified and read Scripture.   One Kiss is the preacher.  Below is a picture of July Paw and even Zu Zu was involved in singing a special number. 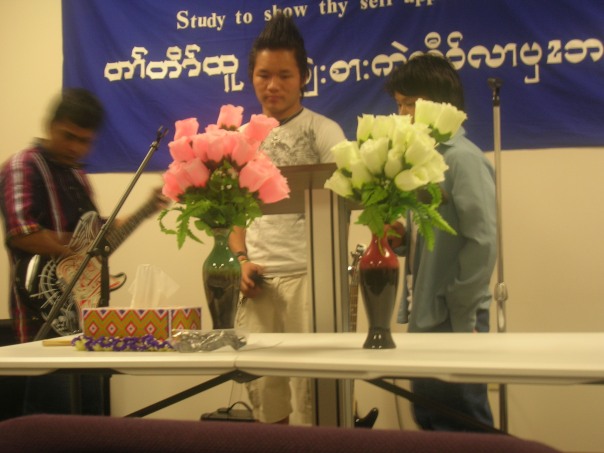 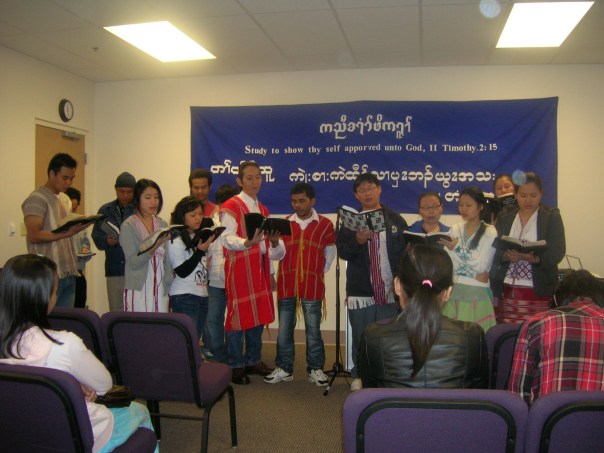 Baby Isaac, the child of Sang Bik and Zar Poe was dedicated last Sunday.  This is their second child.

Several years ago I asked Klo Say about the light brown substance I saw swirled on the cheeks of the Karen women, children, and teens.  He told me that it was make-up one time and sunscreen another.   Yesterday as I was reading an auto-biography by a Karen lady named Zoya Phan, I found her telling about this in the following paragraph:

“My mother’s complexion was a little darker than my father’s;  I had inherited his lighter coloring.  Every day she would weal tha na kah–a traditional Karen face cream–on her cheeks.  She used to make the tha na kah from the bark of the tha maw glay, the tamarind tree.  She would take a smooth-worn stone and roll a length of bark backward and forward on it, adding a little water as she did so.  Gradually, the bark would dissolve into a light yellow paste:  the tha na kah cream.  She would rub in onto her cheeks, using a circular motion, until it left a little yellow sun on each one.  We Karen believe that tha na kah makes a woman look beautiful, and it also protects our skin from the sun.  It was the only “makeup” I ever wore; the next closest thing was when my sister, Bwa Bwa, and I improvised lipstick by smearing some old vitamin tablets across our lips.  My mother would rub tha na kah onto my cheeks, arms, and legs to keep me cool in the hot season.  And when she grew old and less capable, we children did the same for her ( p. 15, Undaunted. Phan, Zoya, 2010. Free Press, New York, NY).

Can you help us think of a Bible name? 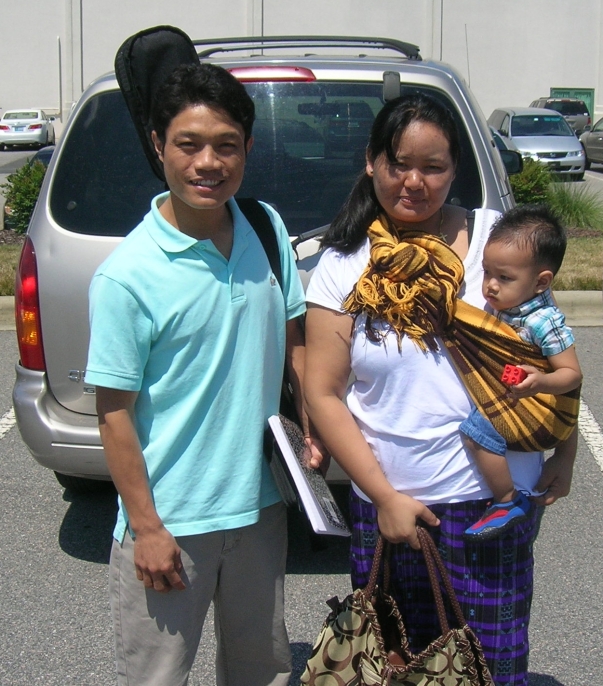 Last night Sang Bik, Zar Poe and I traveled to Greensboro to look at Christmas lights.  While traveling there Sang Bik said,”My wife and I are going to have a baby boy in February.  Can you give us some Bible names for him?”  So we spent the rest of the trip brainstorming Bible names.  A couple of the names caused them to want to learn the spelling and to write them down.  Want to know what they were?  Stay tuned……

While traveling in the car I had the BBN Christian station playing traditional Christmas carols.  Every once in a while Zar Poe beginning singing along with the music.  In the Chin state of Myanmar, many of our hymns have been translated into their language.  I remember one of them she sang was In Excelsis Deo.

Learn how to make this Christmas one you will remember in a totally different way.  Click here!

The lights we viewed were the high flying tree light balls that fill a neighborhood near the Friendly Shopping Center.  Last weekend Sang Bik had helped me put a few up in my tree so I wanted them to see this display. 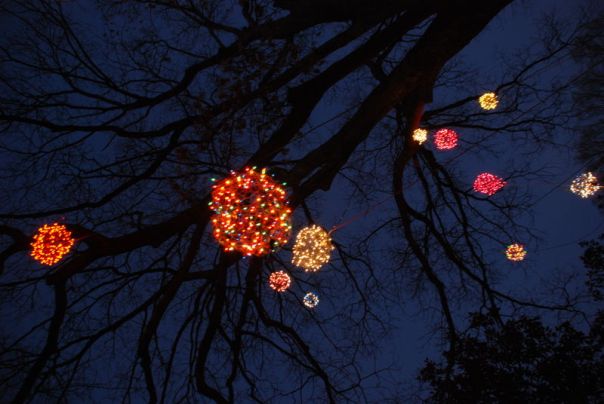 Flash Forward… the baby’s name suggested by an uncle, Isaac.

I would like you to meet three young children, who with their families are striving to make a home in America.   They follow virtually everyone else in the country today whose families have come to make this land their home.  Their full names are Lydia Van Dawt Sung, No Mi, and Van Dwat An.

Van Lian has been in the U.S. for about 3 years.  When I first met he and his son, Puh Yah, I learned that four more members of his family were still in Burma. Van Lian used to attend our church on a regular basis and then moved closer to his work in Rockingham.  Three weeks ago his wife and children arrived.   The whole family is now living in High Point and Van Lian is commuting to work.  Welcome to America, Van Lian family.

Van Zel and Cer Thlia Tial arrived in High Point in the late spring of 2009.  They grew up and were married in a town called Than Thang (which is about 24 miles north of Hahka, Chin, Burma).  They fled Myanmar about 5 years ago.  First Van Zel traveled to Malaysia and then his wife Cer Thlia Tial followed him down to the capital city, Koula Lamphur where they sought refugee status under the United Nations. 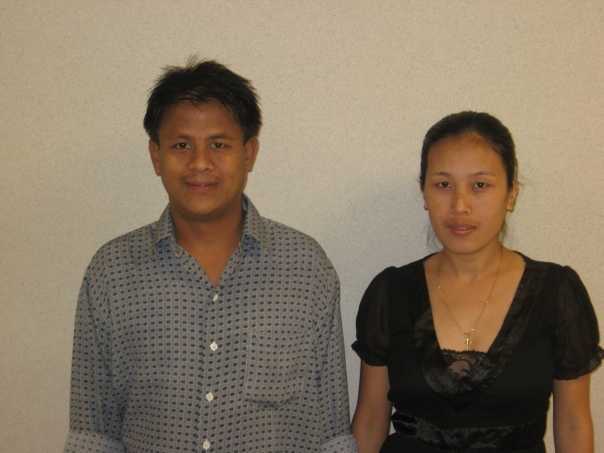 While in Malaysia Van Zel worked for Cambara Highland, a large agricultural enterprise that grew plants and shipped them to Europe and Singapore.  Cer Thlia Tial worked as a waitress at a hamburger shop.

Van Zel was raised in a Christian family, attended church throughout his life.  At  age 15 he was baptized before he finished secondary school.  His mother passed away 10 months ago from the stress and danger in the village.  His brothers have all fled, one to Germany, another to Georgia, U.S., and a third is still in Malaysia.  Only his father remains in their hometown, pray for his safety.

Cer Thlia Tial was orphaned in her teen years.  Her mother passed away in 1994 and her father in 2001.    She has three brothers who remain in the Chin state and seem to be relatively safe. 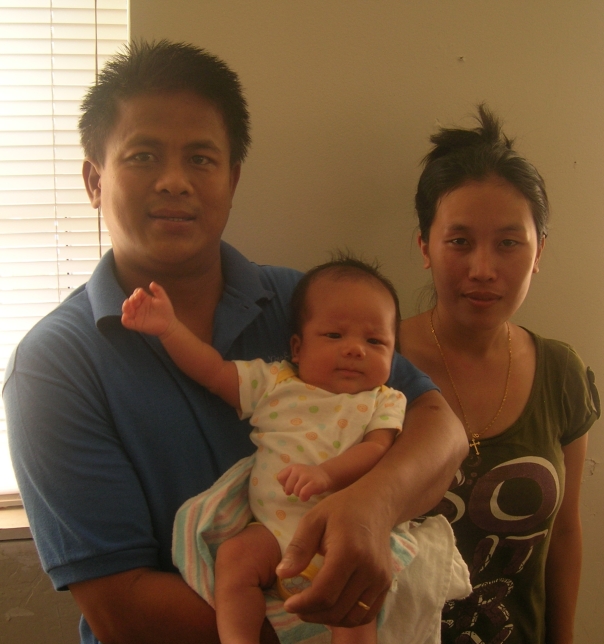 John Prayed a Prayer at the Baby Dedication

It was a great joy to see Van Boi and his family.  We caught up on news and celebrated with them, the purchase of their new home.   Some of the wedding party were guests at his house over last weekend.   Their new son is named Peter. 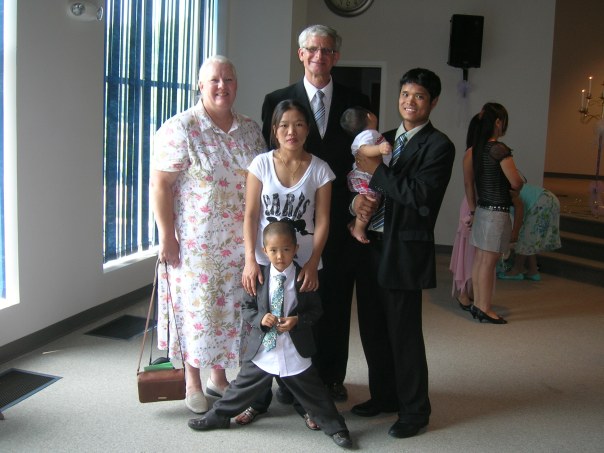 I looked for a picture of Vena on the website and didn’t see it so here is one taken May 10, 2009.   Vena has a steady job, has learned to drive and has a mini-van to haul around his family.    He is Mizo Chin.  The Mizo are a people that live both in India and Burma.  They speak the same language.  A lot of border Chin people speak Mizo.

Phon Shin and Zisar are the proud parents of a baby boy born on May 24th.  Here is a picture of mother, baby and older sister (Noa Mi Sar).  Phon Shin works at Toyko Express on Westchester Drive.

Zu Zu is our Bus Captain

Over the months we have had different people to take attendance on the church bus.  Currently Zu Zu, one of our Karen teens does the attendance.  He is very helpful with updating contact information and keeping track of our riders.  Thank you Zu Zu!!

This is a picture of Zu Zu with the bus riders clipboard!